Even when read in translation, it is clear why this extraordinarily gifted and effortlessly classic author has made such a name for himself. Having been longlisted for the 2017 Man Booker International Prize, Alain Mabanckou’s Black Moses (Petit Piment in French, trans. Helen Stevenson) is a heartbreakingly funny and incisively political “child’s-eye satire” set in 1970s and 80s Congo-Brazzaville.

Straddling an array of themes like orphan suffering, governmental corruption, and mental health in a seedy setting, this tale of endearing novice gangsters and charming sex workers offers a refreshing take on the well-worn tropes of urban fiction. Mental health, for example, is a topic that is too little explored in relation to destitution. In a world that reserves mental health awareness for the middle-class, there is not enough fiction that acknowledges the extreme mental strain of poverty and the ways in which it marks one forever.

In this cynical coming-of-age story, Mabanckou changes the narrative by troubling what is expected of the bildungsroman. Losing his youthful vitality to resentment against the system and amnesia, there is no final flowering for our protagonist and his friends who populate this urban jungle. There is only the hope that he will, one day, publish the story of his remarkable adolescence which he pens from a prison built on the site of his demolished ex-orphanage. As we read this devastating tale, the prison guard’s assurance that Moses cannot “kill anyone with a pencil” rings doubtful.

In a suddenly dramatic twist of poetic justice which allows the eponymous narrator to live up to his namesake, a deranged Moses carries out an act of vigilante justice in the spirit of liberating his people. He kills the mayor of Pointe-Noire, François Makélé, “a maggot of a mayor who cared nothing about the living conditions of Pontnegrins” and held the door wide open for corrupt officials. Following a protagonist who spent the first thirteen years of his life in an orphanage, Black Moses eagerly examines the gulf between the late-1970s Congo-Brazzaville state’s charade of socialist values and the governmental corruption which robs citizens of their futures. The back-cover blurb says it best: “is his country going mad, or is it just Moses?”

Essential to that examination is a feminist condemnation of the use and abuse of women through the secondary story of how government officials impregnate sex workers in their lively brothels only to, as they later do with the orphanage that stores these unwanted children, make a public show of tearing them down in the name of restoring order. But the suddenness of Moses’s act of vigilante justice cushions its impact, a cushioning which goes back to how the tentatively episodic narrative seems to exist in a perpetual state of exposition.

Black Moses is, after all, indebted to the fairytale of Robin Hood, an age-old character the urban gang boys adopt as their namesake in an effort to redeem themselves under the label of a true social egalitarianism that the so-called socialist government can only dream of. Though it documents the social tension between tradition and modernity through alternative conceptions of mental health and cynically announces the ultimate failure of both, Black Moses sings loudest in its full-flavoured vignettes of urban Congo-Brazzaville which are evocatively sketched with an existentialist pen. In a veritable mélange of literary coordinates as far-flung as the Dickensian social tableau and the picaresque, an author who is lauded for his characteristic transplanting of the European canon to African contexts once again hits the mark.

ALAIN MABANCKOU is considered to be one of the most talented and prolific writers in the French language today and the first francophone sub-Saharan African writer to be published by Gallimard in its prestigious “collection” called La Blanche. He was born in Congo-Brazzaville in 1966 and is mostly known for his novels, notably Verre Cassé (Broken Glass) which was unanimously praised by the press, critics and readers alike. His novels are published in more than fifteen languages. You can find him on his website. 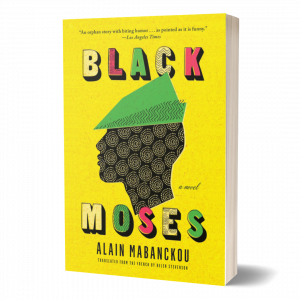 It's not easy being Tokumisa Nzambe po Mose yamoyindo abotami namboka ya Bakoko. There's that long name of his for a start, which means, "let us thank God, the black Moses is born on the lands of the ancestors." Most people just call him Moses. Then there's the orphanage where he lives with his best friend Bonaventure, run by a malicious political stooge, Dieudonne Ngoulmoumako, and where he's terrorised by two fellow orphans – the twins Songi-Songi and Tala-Tala. But those same eventually twins take Moses under their wing, escape the orphanage, and move to the bustling port town of Pointe-Noire, where they form a gang that survives on petty theft.