Home is Not a Country: A novel-in-verse about identity, belonging, and the true meaning of home

Published by the Penguin imprint Make Me a World in March 2021, Home is Not a Country is a captivating novel-in-verse about belonging and identity. Safia Elhillo, author of the award-winning The January Children who is listed in Forbes Africa’s 2018 30 Under 30, shows us the world through the eyes of a fourteen-year-old girl. Home is Not a Country is a story about time travel, truth-telling, and embracing our most authentic selves, the self that does not always fit into the right box.

Nima, the Muslim American daughter of a widowed mother, Aisha, tries to navigate life in her post-9/11 suburban town alongside her only friend, Haitham. Split into four parts, the novel begins in Nima’s home, where we meet her mother and childhood best friend. When school begins, Nima notices a shift in her friendship with Haitham, who is like a brother to her. As he becomes more popular, she becomes more reclusive. Nima finds herself longing to fit in, even if that means becoming someone else, having someone else’s life. She remembers how her parents initially wanted to name her Yasmeen, after her mother’s favourite flower, jasmine. In her mind, Yasmeen is “bright & alive / mouth full & dripping with language.” Little does Nima know, the fictional girl she dreams of becoming may be more real than she imagined, forcing her to fight for her life with a ferocity she never knew she had.

When Yasmeen appears before Nima, solid and real, they travel back in time together. Elhillo’s novel is an honest portrayal of adolescence where we, as readers, witness the veil of naivety lifted before our very eyes. We watch Nima war with herself over who she’d rather be, siding with the smarter, more attractive version of herself that exists in, and beyond, her mind. This thought-provoking, emotive tale reminds us of what it feels like to be young and misunderstood, where Nima’s deepest insecurities manifest in the form of Yasmeen, her parallel self.

The form of the verse novel enables Elhillo to tackle this subject matter in a new and refreshing way. Narrating the story through poetry allows time to feel physically disrupted. As Nima leaves reality and enters her parents’ memories, it begins to feel as though we are floating across the page, not grounded in it, as a typical novel might do. Not only is this effective in conveying the changing environment, but it suggests the long-lasting effect of immigration and trauma on the human body. Nima does not feel safe or grounded in her American home. By physically removing herself from her body and entering a dream-like space, she escapes her so-called home for a little while.

The reader learns to differentiate between memory and reality, weaving through scenes from the past and present. Nima realises her memories of her childhood have been corrupted over time and is able to learn the truth about her father by venturing into the past. Elhillo reveals how narrators can be flawed, how memories aren’t always an honest reflection of people from the past, and how time may not be as linear as we think. Home is Not A Country pulls us through time and forces us to grapple with the possibility of our alternate selves existing, or waiting to exist, at the same time as us.

We witness Nima encounter racism on various occasions. Having grown up as an immigrant daughter in post-9/11 America, Nima’s feelings of simultaneous shame and anger surrounding her identity will be familiar to many. Tormented at school and cast out by society, she begins to imagine another life for herself: a life back home as the daughter her mother deserves. Though we do not learn where Nima and her family are originally from, Elhillo leaves small hints that suggest she may be Sudanese. At times, she feels as though she has two “ghost parents” and struggles throughout the novel to mend the relationship with her mother.

Nima finds it difficult to accept the “father-sized ache” in her home, recognising his absence in her mother’s mannerisms and in the “worry lines stamped into her brow.” She watches her mother, who once told her to never be “ashamed of who we are” stop wearing her headscarf. She is embarrassed by the scent of her mother’s food—“okra & lamb & rice”—and discards it before anyone at school knows it is hers, replacing it with “plasticky American cheese” sandwiches. These small details are reminders of how we have been taught to shrink away from our true selves and our cultures for the sake of blending in.

Nima often wonders who she could have been had they never left her mother’s home country. Through photographs, Arabic pop music, and dance, Nima finds ways to tie herself back to her homeland. People from the diaspora will know this feeling well: to have part of yourself rooted elsewhere, far from reach. At its heart, Home is Not A Country is a story about adolescence, friendship, and finding ways to belong in a country that does not want you. It is also a story about magic and our proximity to other worlds, other selves. Through the young eyes of Nima, we experience the passing of time and the blessing of it. We relive our own teenage years—the confusion, anger, exhaustion—and feel empowered to fight for our own futures. Home is Not a Country is a love letter to the children of the diaspora, teaching us that there are other ways to find home. Home is not a country: it exists within all of us.

LEANNE FRANCIS is an English Literature and Creative Writing graduate from the North East of England. Being of South African and St Helenian descent, she is keen to pursue a career in publishing and poetry whilst pushing for representation across both. You can find her at @leannekf on Twitter or @leannekerenza on Instagram.

SAFIA ELHILLO is the author of The January Children (University of Nebraska Press, 2017), which received the Sillerman First Book Prize for African Poets and an Arab American Book Award, Girls That Never Die (One World/Random House, forthcoming), and the novel in verse Home Is Not A Country (Make Me A World/Random House, 2021). Sudanese by way of Washington, DC, she holds an MFA from The New School, a Cave Canem Fellowship, and a 2018 Ruth Lilly and Dorothy Sargent Rosenberg Fellowship from the Poetry Foundation. Safia is a Pushcart Prize nominee (receiving a special mention for the 2016 Pushcart Prize), co-winner of the 2015 Brunel International African Poetry Prize, and listed in Forbes Africa’s 2018 30 Under 30. You can find her on Twitter and on her website. 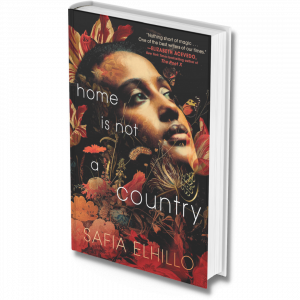 Home is Not a Country by Safia Elhillo
Published by Make Me A World on 2 March 2021
Genres: African, Coming-of-age, Novel-in-verse, Supernatural, YA
Pages: 224
Format: Hardcover
Buy on Bookshop.org
Goodreads

Nima doesn't feel understood. By her mother, who grew up far away in a different land. By her suburban town, which makes her feel too much like an outsider to fit in and not enough like an outsider to feel like that she belongs somewhere else. At least she has her childhood friend Haitham, with whom she can let her guard down and be herself. Until she doesn't. As the ground is pulled out from under her, Nima must grapple with the phantom of a life not chosen, the name her parents didn't give her at birth: Yasmeen. But that other name, that other girl, might just be more real than Nima knows. And more hungry. And the life Nima has, the one she keeps wishing were someone else's...she might have to fight for it with a fierceness she never knew she had.