At the heart of The Fortune Men is a true and horrific story of racial discrimination in 1950s Britain. Nadifa Mohamed manages to masterfully bind together fact and fiction without erasing the chilling reality of Mahmood Mattan’s state execution. Instead, she writes humanity and dignity into a story that has been largely forgotten in the wider British consciousness.

Set in 1952 Cardiff, The Fortune Men centres on Mahmood, a Somali seaman wrongly accused of murdering Violet Volack, a shopkeeper and moneylender. The criminal case was undoubtedly marred with racism and malpractice, with even Mahmood’s defence lawyer calling him a “half-child of nature, a semi-civilised savage.” Tragically, he was found guilty and hanged in Cardiff Prison on 3 September 1952.

Knowing how Mahmood’s story ends does not hinder the enjoyment of the novel. Instead, there’s an appreciation of the depth and warmth Mohamed brings to this grim case. The reader steps into the mind of Mahmood and rarely leaves for the length of the novel, having the chance to empathise with Mahmood’s fears, desires, anger, and happiness.

Mahmood was not just the last innocent man to be executed in Wales. He was a father, son, brother, and friend. But Mohamed isn’t afraid to show Mahmood as a flawed person either. He is allowed to be whole, which makes the cruel treatment he faces even more difficult to read. Until the very end, Mohamed’s storytelling stays beautiful and compelling, in spite of Mahmood’s heart-breaking final moments which do not fail to make the reader feel his pain and rage.

There are layers and complexity to every element of this story, especially when it comes to the characters surrounding Mahmood. From Mahmood’s white Welsh wife, Laura, who is written both unyielding and vulnerable, to his close friend Berlin, who is both wise and humorous, the cast of characters explores tensions and issues present in 1950s Britain as a result of immigration waves from different parts of the empire. By doing this, Mohamed allows all her characters to be profoundly human all the while reflecting the realities of race and immigration.

She also highlights the impacts of the trial beyond Mahmood’s death. The author does not shy away from depicting post-WW2 Britain in all of its hopeful and ugly glory. In both the book and real life, Laura and their children face racist abuse before, during, and after the trial. One of the sons, Omar, described the attention surrounding his father’s execution as a “cancerous growth in [the] head.” In 2003 he was found dead on a beach with a bottle of whiskey in hand.

The book is infused with culture, religion, and the history of what was then called British Somaliland. It’s a perspective that doesn’t get enough airtime in a lot of Black British literature. Being transported from wet and cold Cardiff to the place of Mahmood’s childhood halfway through the book was memorable. This snapshot, where we see Mahmood’s comfortable upbringing, his loving mother, and the beginnings of a lifelong friendship with Berlin, is heavily contrasted with the dehumanising confinement he faces in the ‘present’.

Of course, there is a colonial presence in the flashbacks, and this presence persists through the entire novel, whether it’s the community of seamen that come from all different parts of the empire or the superiority complexes of some of the white characters. It is, however, Mahmood’s voice, thoughts, and feelings that truly dominate this story. His misplaced naivety in the justice system makes his story moving and relatable.

The Fortune Men is about luck. It’s about how life for a young Somali man in 1950s Britain relies on good fortune and when that fortune runs out, they cannot rely on an impartial justice system or tolerant society to save them from a miscarriage of justice. Mohamed reminds the reader not just of a terrible moment in British history, but also of the complex and rich lives that are cut short due to unavoidable systems entrenched with intolerance.

DEONTAYE OSAZUWA is a law student and creator of the YouTube channel Heroine’s Corner where she spotlights books written by Black authors, with a focus on Black British literature. Outside of reading and YouTube, Deontaye enjoys writing of both the journalistic and fictional variety.  Her favourite genres are historical fiction and fantasy. She is always looking for stories that centre Black womanhood and girlhood to escape into. You can find her @heroinescorner on Twitter.

NADIFA MOHAMED was born in 1981 in Hargeisa, Somaliland. At the age of four, she moved with her family to London. She is the author of Black Mamba Boy, The Orchard of Lost Souls and, most recently, The Fortune Men. She has received both The Betty Trask Award and the Somerset Maugham Award, as well as numerous other prize nominations, for her fiction. She was named as one of Granta’s Best of Young British Novelists in 2013. She contributes regularly to the Guardian and the BBC. You can find her @thesailorsgirl on Twitter. 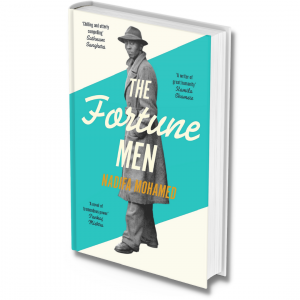 Mahmood Mattan is a fixture in Cardiff's Tiger Bay, 1952, which bustles with Somali and West Indian sailors, Maltese businessmen and Jewish families. He is a father, chancer, petty criminal. He is a smooth-talker with rakish charm and an eye for a good game. He is many things, but he is not a murderer. So when a shopkeeper is brutally killed and all eyes fall on him, Mahmood isn't too worried. Since his Welsh wife Laura kicked him out for racking up debts he has wandered the streets more often, and there are witnesses who allegedly saw him enter the shop that night. But Mahmood has escaped worse scrapes, and he is innocent in this country where justice is served. Love lends him immunity too: the fierce love of Laura, who forgives his gambling in a heartbeat, and his children. It is only in the run-up to the trial, as the prospect of returning home dwindles, that it will dawn on Mahmood that he is in a fight for his life--against conspiracy, prejudice and cruelty--and that the truth may not be enough to save him.